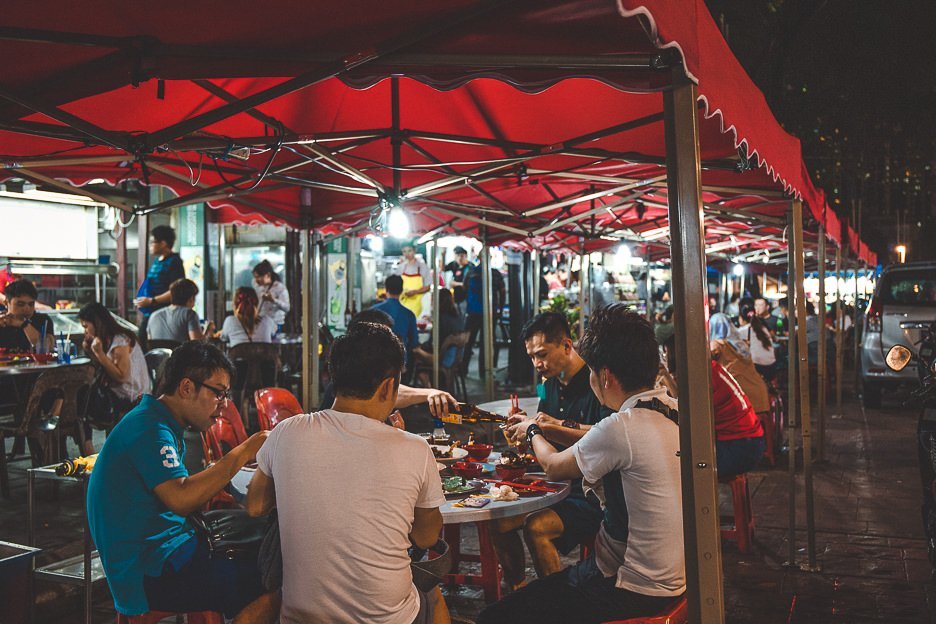 A FOODIE'S ADVENTURE AT A MALAYSIAN STREET FOOD MARKET

I’m hot and sweaty. Hot may be an understatement. The humidity must be at least 80%. I’ve been out of the cool comfort of the air-conditioned car for less than 5 minutes and can already feel beads of sweat forming on my forehead. Maybe UberEATS would have been a better dinner plan tonight after 8 hours in transit.

I lift my head after wiping my brow and my eyes widen with astonishment. A sea of black-topped heads bob up and down the corridor lined with neon lights. Shrieks of delight echo in the distance whilst pots clang to my right. There’s an energy here amidst the crowd. We’ve come to the Jalan Alor Street Food Market in Kuala Lumpur. Suddenly the tiredness and the stickiness I felt from our long plane ride has vanished. I’m famished and my voracious appetite is begging to be satiated.

We walk down the street eager to sample the night’s offerings. Large pots of oil bubble and steam rises from large woks. Spiky durian hangs from carts, some split in half revealing the fleshy stinky fruit inside. Restaurateurs thrust laminated menus in our faces as we stride by. They call us, beckoning with their arms and inviting us in to sit at their table and drink their beer.

We stop at one of the larger market stalls. Skewers are lined up meticulously. We see the shiny flesh of chicken, pork and beef. Raw fish and other unfamiliar tentacled things shine under the lightbulbs. There’s plenty for the vegetarians too. I recognise broccoli, cauliflower, bok choy and tofu all chopped and prepped ready for sizzling. We’re faced with a plethora of options fit for a king’s feast. 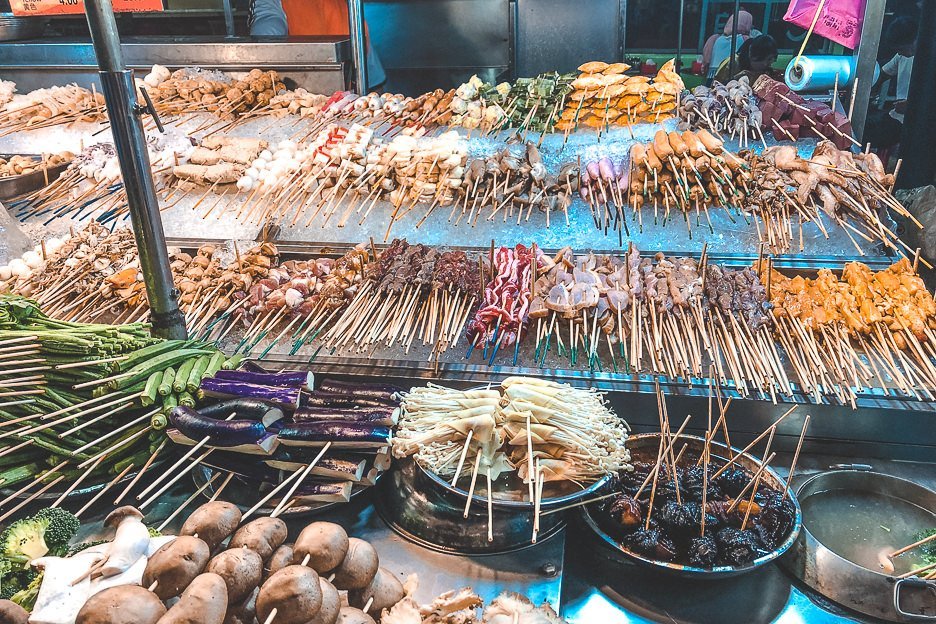 “Come, sir. Tell me what you want and I cook for you.” A man with a basketball singlet wears a baseball cap turned backward and waves to us with a pair of tongs and silver plate. We select a few skewers from the piles before the man ushers us behind the food cart. We step down to the seating area and find two red plastic stools underneath a Coca Cola umbrella. A tray of condiments sits in the middle of the table and I lift the lid of each one, sniffing curiously. One looks like a chilli oil and another resembles a curry-like paste.

Our food arrives and we tear the meat off the sticks like a lion feasting after a fresh kill. I munch on the chicken, savouring the semi-sweet coating. My broccoli is crunchy and saltier which I’m more than happy with. We lick our fingers clean.

For most of these satay stalls at the street food market, the ends of the skewers are painted different colours to price the food accordingly. It’s a colour coded and honesty system. We beckon to one of the waiters with a money pouch to count our naked skewers and he asks us for MYR 25 (AUD $8.50). This dinner date certainly won’t break the bank tonight.

Back on the main path of the street food market, we bump into passing strangers, much like a waddle of penguins. Buskers play guitars, rattle tambourines and croon into microphones. Kiosks pop up between food wagons adorned with mobile phones, phone cases and accessories. I spy lone figures squished into these neon-lit boxes, heads bowed engrossed in their smartphones.

A rattling sound attracts my attention. I glance down and my eyes lock with those of an old man. I almost gasp out loud. He’s a burns victim. His recovering skin is taut and stretches over his gangly limbs. The sockets of his eyes droop so far down, I glimpse the red blood vessels pulsating at the surface. His bottom lip is curved upwards. One would think this man was snarling at me had it not been for the sadness I momentarily read in his eyes. I’ve looked away quickly and feel ashamed of how I’ve recoiled in horror. Jogging a bit to catch up to my boyfriend, I resolve to go back to put a few coins or notes in his crumbling styrofoam cup. 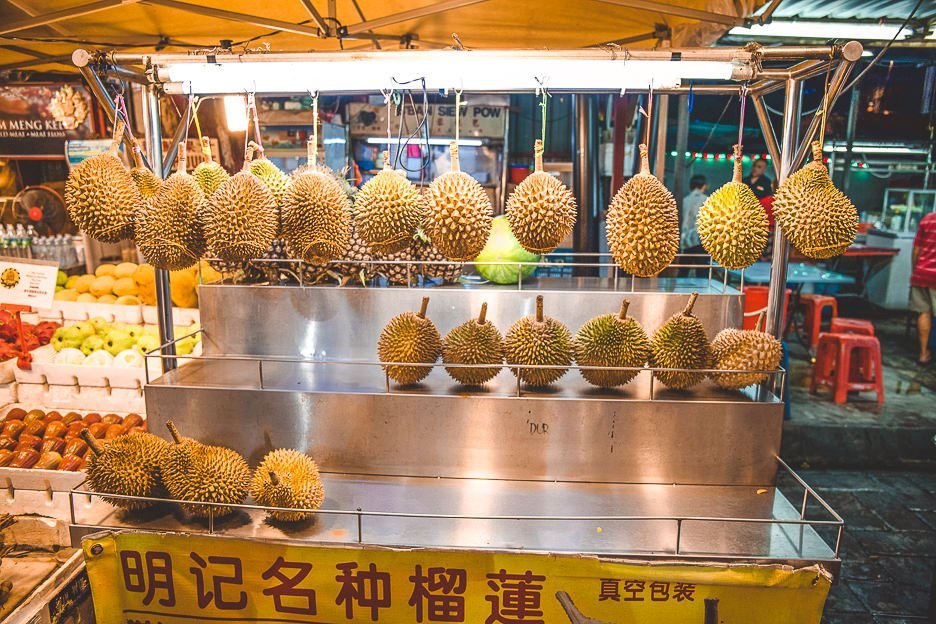 Our next target is Wong Ah Wah. My boyfriend has read online that the establishment is renowned for its “special chicken wings” and he’s on a mission to eat them. We wade through the crowded tables looking for a seat and come face to face with a man resembling a modern day Chinese Laughing Buddha. His faded orange grease-stained t-shirt falls over his fat belly and he is mopping a spiky head of hair with a handkerchief. A tea towel is draped over his shoulder and a notepad sticks out of his back pocket. He motions for us to sit at a free table opposite the outdoor kitchen. A moment later, a dog-eared folder is slapped on the table. Flicking to the first page, a picture of the famed chicken wings gleams at us. We order a serve of 6 wings, a pint of beer and a Coca Cola.

I’m enthralled by the scene around me. Large steaming plates transport piles of hot rice noodles to famished diners, wafting trails of steam. It’s as if one of Daenerys’ dragons unleashed a fiery attack leaving only hissing smoke in its wake. To my right, a young boy with bleached hair shovels noodles into his mouth with a pair of chopsticks. A bum bag hangs around his chest. His female companion pays no attention to him, nor to her food. Her eyes are glued to her mobile phone, clearly lost in the vortex of the internet.

Two men are seated to our left. Their heads are neatly shaven and fuzzy, grey stubble covers their chins. The men’s bellies sag between their knees from many Bintang or Carlsburg, the green and white Danish logo splayed almost everywhere at Wong Ah Wah’s. I watch their hands move vividly in conversation, cigarette ash dissipating into the night. I can’t understand what they’re saying but their voices are animated. It must be an amusing tale as the wrinkled lines around their eyes and boisterous laughs make me believe that these aged men have known each other for years. I’d love to capture this moment on our Canon 6D Mark II but I’m too nervous to ask for a portrait. I leave them to their beer and conversation; they look like they’re having a good time.

The night air is a heady mix of cigarette smoke, sizzling meat and sweat. Workplace health and safety is practically non-existent here and hygienic practices are loosely followed. The waiters walk around in flip flops, tea towels are used for wiping tables and drying glasses, and it’s unlikely that hair nets and gloves are worn in the kitchen. A germaphobe would find this scene revolting but I’m fascinated. The system works and each person has their place here.

Our chicken wings arrive, served with a chilli dipping sauce. Mid-mouthful, a busker approaches us, jingling a bag under our noses. She moves on swiftly from our table when she notices our hands are occupied with sticky barbeque chicken. The skin is crispy without being burnt and the meat is cooked to perfection. I even work up the courage to try a bit of the chilli sauce and am relieved that my taste buds are able to tolerate the spice level. 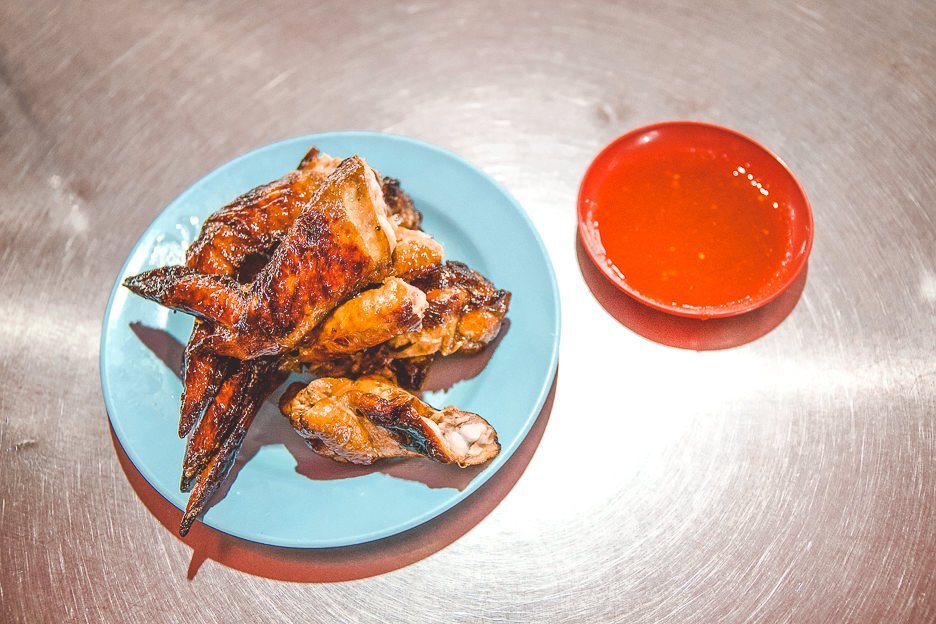 With one last sweeping gaze of the restaurant scene around us, we gather our belongings and turn to join the throng on Jalan Alor. It’s time to search for ice cream. We close our evening with what I imagine Malaysian kids cry out for after eating all their veggies – a bowl of iced cendol. A young coconut is split in two creating a natural bowl. Three scoops of ice cream fill this pocket and then we’re free to add toppings and sweet sauces as we please. My boyfriend adds a generous scoop of cendol. I manage a small nibble of the seaweed-looking pandan leaves, which has a texture that reminds me of jelly.

It’s close to 11.00pm and the street food market shows no sign of winding down, but for us, it’s time to hit the sack. We begin walking to the top of Jalan Alor to find a taxi to take us home. I see the burned man up ahead, sitting cross-legged on his cardboard box. I dig the money out of my back pocket ready to place into his cup. When I lean down, I notice his eyes are closed. I drop the coins deftly and walk on. I briskly walk a few steps away before looking over my shoulder. He’s peering into the cup intently. Tonight, I hope that he will eat like a king.

The Jalan Alor Street Food Market is open daily. The opening hours of the restaurants and stalls vary. Generally, there is little activity in the morning and throughout the day. To fully experience the street food night market atmosphere, we suggest heading there between the 7pm – midnight when the market is at its busiest.

HOW TO GET TO JALAN ALOR STREET FOOD MARKET

Public transport in Kuala Lumpur is minimal and not very efficient. If you’re not within walking distance, we would recommend catching a Grab. The Malaysian branch of Uber has merged with Grab and is no longer available in the country. Grab is super easy to use once you download the ride-sharing app on your iPhone. You will have a known fixed fare once you make your booking and you can pay via cash or card.

Interested in seeing more of the Malaysian capital? Check out this blog post which details things to do in Kuala Lumpur.

Are you ready to chow down on some tasty street food in Kuala Lumpur? 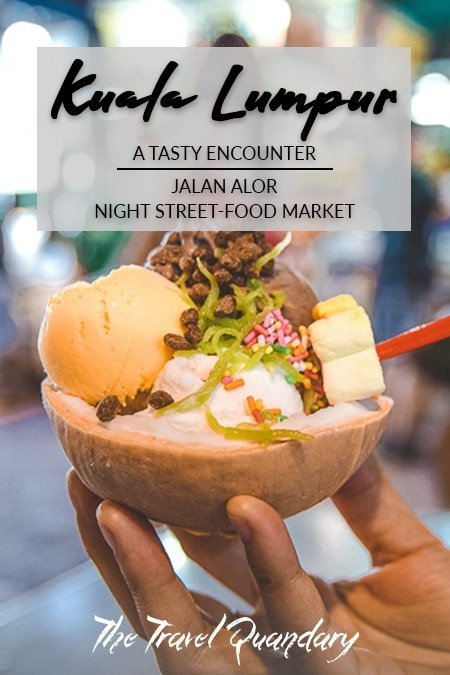 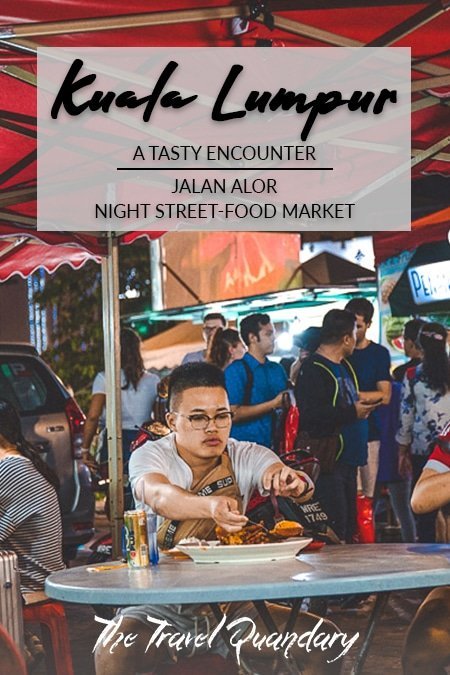 Find an island... where nobody goes... nobody know

Do one thing today to bring you one step closer to

YES 💍 ↠ To forever being your partner in this

Throwback to the days when our skin was a light ci

There’s always something to smile about 😊 ↠